Choice of Nature Tourism in Banyuwangi, Suitable for Family Travelers 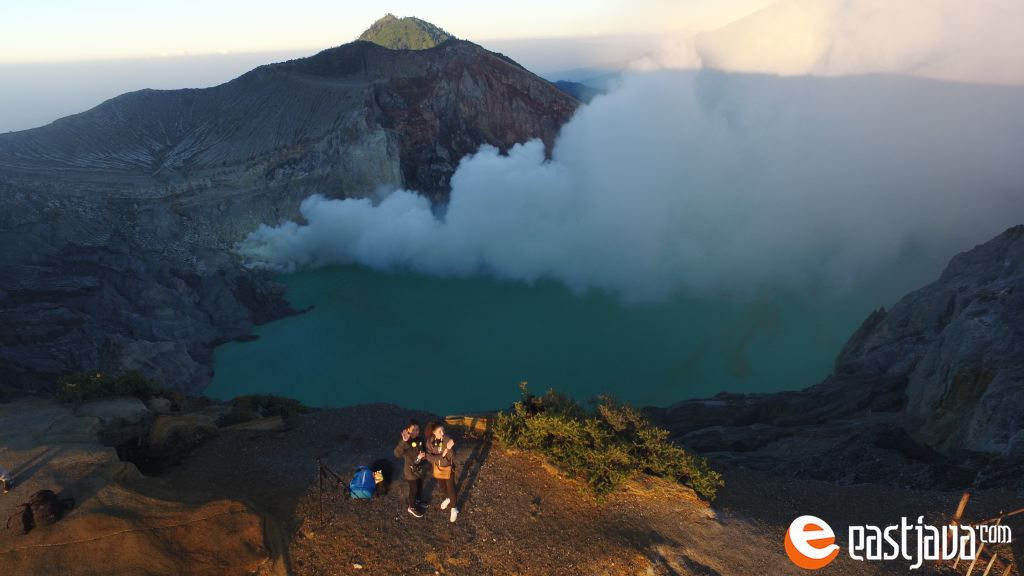 Ijen Crater is the biggest crater lake in Java. The sulfur crater lake lies between a natural dams of deeply etched rock. It is 200 meters deep and contains about 36million cubic meters of steaming acid water, shrouded in a smelling swirling sulfur cloud. Inside the crater the different color and size of stones are found. Indeed the crater of Ijen is beautiful garden of stone as well.

The view of sulfur miners who climb and go down to the crater is also amazing. A man puts about 10 kg of yellowish stone in to his basket, before he descends the mountain slope to sell his load, carrying the same basket, going in the same direction, digging the same mineral. It is the natural picture that can be seen everyday.

Ijen Plateau lies in the centre of Ijen-Merapi Malang Reserve, which extends over much of the mountainous region directly west of Banyuwangi and borders on the Baluran National Park in the northeast. As at Mt. Bromo, the caldera is best viewed from the air. Fortunately, almost all commercial flights operating between Denpasar - Surabaya, Yogyakarta or Jakarta usually fly, if not directly over, then close by Ijen plateau, where the seemingly luminous blue/green crater lake forms an unmistakable landmark. It is beautiful scenery and located about 32 km to the north west of Banyuwangi.

The principal attraction at Ijen is the large Crater Lake that has much sulfur, which lies hidden between sheer walls of deeply furrowed rock at more than 200 meters. The Ijen crater itself lies at approximately 2,300 meters above sea level. It forms a twin volcano with the now extinct Mount Merapi. The enormous Crater Lake, which is 200 meters deep and covers an area of more than meters, a million square meters, contains about 36 million cubic meters of steaming, acid water.

Ijen crater shows a special type of volcanic feature common to Indonesia, about 1 kilometer in diameter and 175 meters deep. The floor is covered completely by a warm lake, milky blue green in colours held back by a dam built many years ago by the Dutch, in order to keep the hot, mineral laden water from raining the crop lands below.

The crater can be reached from either the east or the west by any kinds of vehicles, but the second part of the trip covers distance 3 km on foot (jungle track). However, the latter is more popular approach, since the climb from the road's end to the edge of the lake is only one and a half hours. And a walk around the lake takes a full day.

The temperature drops at night, near the crater rim it can fall to about 5° Celsius. The road ends at Jampit, where very basic shelter is available. It is also possible to sleep in the old vulcanology station further up the hill, now used by sulfur collectors, but permission must be obtained in advance.

The sulfur is transported entirely on foot. In the past, horses were used but they were found to be less practical on the hazardous terrain. Today, the mine yields nine to twelve tons of sulfur per day.

Men carry individual loads of up to 70 kg, often barefooted, up to the rim of crater and then 17 km down the mountainside to a factory near Banyuwangi. The porters are paid by weight. The most important advice if you are traveling to Ijen is: "If you lose your way, just look out for the sulfur trail". The meaning was clear, since a continuous flow of two ways traffic, carrying the sulfur down the mountainside from the lake and trudging up again to re-load, had left a yellow trail on the well-worn path. The best time for seeing Ijen Crater is at 8 to 9 am.

Choice of Nature Tourism in Banyuwangi, Suitable for Family Travelers

Ngagelan Beach Ngagelan beach is breeding area. It is located 7 km to the west of Trianggulasi Bay. It is also the hachery for the baby turtles. There are some biology students do the research here. Ngagelan beach has much kind of turtle, such as Lepidochelys olivaceae, Eretmochelys imbricata, Dermochelys coreacea, Chelonia mydas, etc. Lepidochelys olivaceae is the most available here. Ngagelan beach can reach by any vehicle from Rowobendo post through west direction or it can be reach by foot through the beach that about 8 km. www.eastjava.com

Hotel Deals of the Day